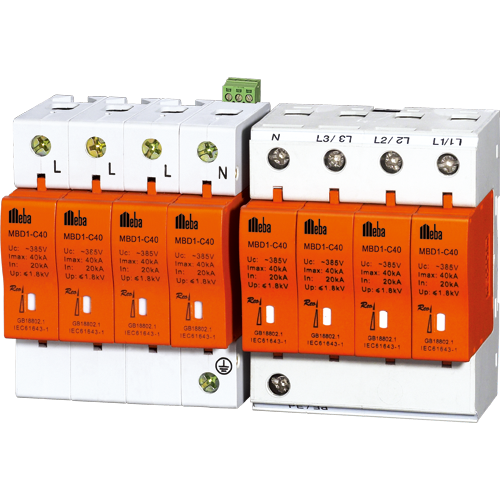 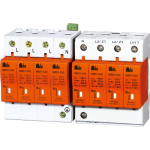 Meba lightning surge arrester MBD1-C40(hereinafter called SPD) is suitably used in the IT, TT, TN-C, TN-S, TN-C-S and etc power supply system of AC 50/60Hz, rated voltage up to 380V, to protect from direct and indirect lightning impulse and other transient over voltage. As per the conditions of IEC61643-1: 1998-02 standard, Class II surge protective device, it is category C surge protective device.
SPD has two protection modes: MC and MD
SPD is in compliance with GB18802.1/IEC61643-1 standards.

Operation Elements
SPD as only one side of terminals, able to prevent from being electric touching, indoor fixedly mounted, limiting voltage.
SPD has built-in disconnector, when SPD is invalid due to overheating or breakdown, the disconnector can automatically separate SPD from the network, meanwhile send an indication signal. The visible window show white color in normal service, if to be separated from network, it will show red color.
1P+N, 2P+N, 3P+N SPD consist of 1P 2P 3P SPD and NPE neutral and earthing protection modules, used in the power supply system of TN-S, TN-C-S and etc.

Installation
– To be mounted between LPZ0B or LPZ1 zone and LPZ2 zone, adopts 35mm standard mounting rail. The cross sectional area of multi-strand soft copper conductor: 2.5 – 35 mm2.
– Every phase of SPD shall be protected by fuse or mini circuit breaker from short circuit when SPD is broken down caused by surging voltage.
– It is mounted in distribution boxes of different floors, computer center, telecommunication room, control room of elevator, CATV room, fire fighting center, distribution box of villa and etc.